IS OUR FUTURE LOCKED IN THE PAST 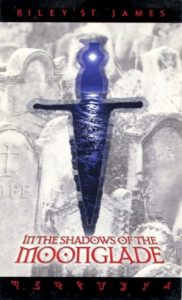 Photojournalist Fletcher McKeane’s life has been strangely branded with tragedy. Everyone he’s ever cared about has been snatched from him by death. Now the radiant young woman he treasures the most meets a ghastly end… Soon followed by his closest friends.

As McKeane passionately bonds with another woman they suspect a satanic force from an alternate reality existing just beyond the earthly senses is behind the cryptic deaths.  Hurdling macabre obstacles, they undertake a chilling search that finally leads them to historic England and a haunted graveyard where no soil has been turned for more than two centuries.

Excerpt from "Moonglade ..." (On Amazon)

The door was halfway open as Fletcher barged into the darkened living room. He shone his powerful flashlight around the rooms seeing they were empty.

Hearing nothing, he quickened his pace down the hallway, stopping at the open doorway of the bedroom. He grimaced at the fading but still pervading stench of rotting flowers and smoke. Regaining his composure, he scanned the room with his flashlight, suddenly stopping to focus the wide beam on the lifeless body lying on the bed. Oh God, no! He put his hand on the wall and felt for the light switch, flipping it on.

He stepped back in shock as he saw Von Bruen lying there. Her long slender body was still and her head was propped up on a pillow. The drip-pan of the overhead girandole had been bent forward, allowing the molten candle wax to drip onto her narrow, ashen face. Her open, terror-filled eyes peered upward through the thin mounds of solid glistening tallow

Tense, he looked around the room, seeing the small pools of nauseous slime giving off a vile, steamy vapor. He nervously aimed his flashlight into the shadows of the corners, fearful at what else he may discover. Alarmed, he abruptly froze the beam on Jennifer’s crumpled chain and crucifix lying on the floor. Stepping around the mire, he picked it up and firmly grasped the silver cross while looking upward with a silent plea.