Southeast Asia—Warfare on a Skewer? 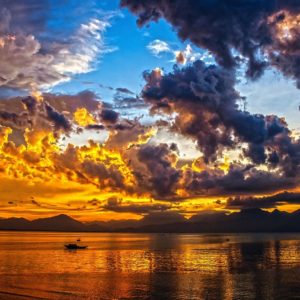 On May 14, 1845, with a seasonal monsoon building to pound the Indochinese coast, an American war party of U.S. sailors and Marines stormed the shores of Danang, South Vietnam…Wait…is there a typo here? Nope… no typo here. The first clash between the United States and Vietnam (then Turon, Cochin China) occurred in May of 1845 and lasted for twelve days—as officially recorded by U.S. Navy logs of the USS Constitution.

On May 10 the mighty American frigate USS Constitution, nicknamed “Old Ironsides,” under command of Captain John Percival, dropped anchor in the bay that bordered what is known today as Danang, Vietnam. (The anchor location was near what would become known as Monkey Mountain to Americans during the modern Vietnam War.) Percival’s initial mission was peaceful: to bury a musician, named Paul Cooke, who had recently died aboard the ship that was on a worldwide voyage, far from home.

Following a cordial welcome by Danang’s authorities—termed “Mandarins” by the Americans—the arrangements were made to lay Cooke to rest in an attractive plot within a native burial ground nestled at the foot of a mountain. On the following morning all went as planned. The peaceful ceremony was completed in proper fashion and was promptly followed by Percival and his crew returning to the ship.

However, on the fourth day of their anchorage the serene atmosphere dramatically changed. While the ship was being upgraded and watered to prepare for sea, Captain Percival received an alerting message from a villager that a French Missionary, Bishop Domenique Lefevre, was imprisoned by the Danang Mandarins; and the bishop had already been tried and sentenced to death. Crumpling the message with a rigid clench, Percival stiffened and turned toward the city with a determined stare. He hastily decided he would carry out a humanitarian deed and rescue the Bishop from these “nearly barbarous natives,” as he called them, without regard as to why the Bishop’s fate had been so dastardly sealed. (Captain Percival was known on the high seas for his impetuous and headstrong nature—nicknamed “Mad Jack” by his naval peers.)

For the next six days, Percival attempted everything within his power to free the Bishop. He first directed a threatening war party consisting of sailors and half of the ship’s regular squad of sixty Marines to storm into the city to intimidate the mandarins and demand the immediate release of the Bishop. (What’s incredible about this recorded incident, is that the first 3,500 combat designated troops of the modern Vietnam conflict landed on these very same shores in 1965—and they were also Marines.) 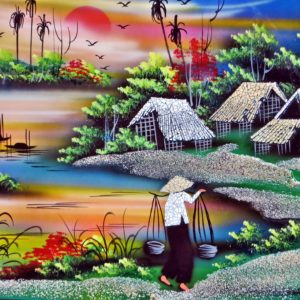 When Percival’s boisterous tactic failed to rile the Mandarins, or produce any clue as to the Bishop’s whereabouts, or further gather any evidence that the Bishop actually existed, the agitated Marines seized three defenseless Mandarins as hostages and exited the city. And for extra measure, when the sailors reached the shoreline, they commandeered three dilapidated Chinese junkets, anchoring them in the bay close to the Constitution. Meanwhile, the Mandarins continued to mount no resistance. They simply stood on the beach, shrugged and watched the rowdy Americans in confused silence.

As the days passed, Captain Percival would sporadically compound his huffing and puffing shenanigans by standing on the battery deck and ordering a few of the 24-pounder long-guns to fire toward one of the forts located at the edge of the city. Meant only as another reckless warning, Percival would ensure the cannons were trained to have the iron projectiles purposely fall short.

Nevertheless, Cochin Emperor, Thieu Tri, growing impatient and now openly irritated, wouldn’t budge under any of Percival’s aggressive pressure. He sent word to the anxious captain that absolutely nothing would be accomplished until the Americans ceased their hostile incursion so that talks could begin. (At this point, there were conflicting reports on whether any Bishop was even being held on the island.)

Finally, on May 24, after days of wrangling and a few isolated incidents of “pushing and shoving” on land, yet no casualties, Percival decided that his animated bluffing had failed. Therefore, he submitted to the Emperor’s demands and released the junkets and hostages to demonstrate his “good will.” A strained, but confident Percival retreated to his cabin while fully expecting that the liberated Bishop would soon appear, board the frigate, and the crew could weigh anchor and proudly commence with the remainder of their voyage. But Percival’s wait proved fruitless while the crew battled a ferocious wind-swept downpour that pelted the area, adding to his exasperation. Finally, Percival dispatched a message of final warning to the emperor: If the ship sailed without the Bishop he would report this matter to the French authorities when he arrived at Canton, China, and surely they would return to seek revengeful justice! 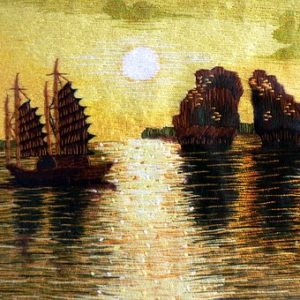 However, the only activity that Emperor Thieu Tri was involved in was further flaunting his defiance by fortifying Danang’s beachhead, and the surrounding fields in plain view of the frigate, which enabled the frustrated captain to clearly observe their preparations. Moreover, the Mandarins had summoned a few Chinese ships from Hue, the Cochin capital. While those armed ships slowly passed the frigate as they entered the bay, Percival concluded that he might have taken on more than he could handle and gave his executive officers orders to prepare for sea.

On May 26, 1845, the outraged Percival weighed anchor for Tunisia to continue his intended voyage. Fully underway toward the open sea, he ordered a volley of long-gun bursts toward a vulnerable cluster of hamlets located at the outskirts of the city, inflicting little if any damage. Ironically, for all his bluster and trouble, Percival hadn’t even laid eyes on the Bishop, much more liberate him. Everything had virtually been left the same as they were when the Constitution arrived sixteen days before—except perhaps, precipitating some tense relations between Washington and China, even though President James Polk apparently had no direct bearing on Percival’s rash actions while anchored at Danang.

As the Indochinese coastline faded from view, one of Percival’s officers, Fifth Lieutenant John B. Dale, wrote in his journal: “...it seems, I must say, to have shown a sad want of 'sound discretion,' in commencing an affair of this kind, without carrying it through to a successful conclusion.”

Incredibly, Lieutenant Dale hardly knew then how accurate and prophetic his words would loom over a century later..........

America Storms Ashore: In March 1965 the first American combat troops stormed ashore—with 3,500 Marines landing on that same Danang beach. To support America’s combat escalation nearly 20,000 men per month were being drafted for active duty. And by June 74,000 Americans were deployed in Vietnam. In October 1965 the first major ground battle involving American troops occurred at Plei Me, in the La Drang Valley. Both sides suffered heavy losses. By the end of 1965 the Vietnam campaign was at a new phase, officially dubbed “Counteroffensive.” U.S. military strength was 200,000 and climbing. By the end of 1967 U.S. troop deployment had reached a staggering 475,000. Regardless of the increasing political strife that besieged Washington in late 1968, troop strength was still rising, reaching 510,000. Deaths in that year alone totaled 16,589, not including the wounded and missing; nearly 39,000 had died to date. 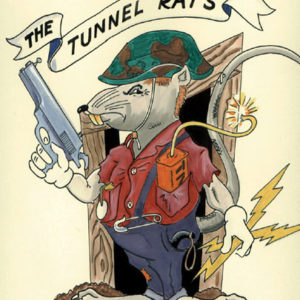 In 1969 the Nixon Doctrine, intended to end the war with honor, was put into effect. Nevertheless, by spring, military strength had peaked at 543,000. But gradually the complexion of the country began to change. The reduction strategy of U.S.military was in place and 25,000 troops were withdrawn by September. This demonstrated the “Vietnamization” phase had been set in motion—South Vietnam would take over the warfare, while the Americans steadily pulled out and went home.

The final major ground battle involving U.S. military occurred in October 1971. Throughout that year U.S. strength was continually reduced and those units that remained were converted to a defensive status. By the end of the year there were less than 200,000 troops in Vietnam, the lowest level in six years. The troop withdrawal continued while the peace process including a total cease-fire was being negotiated in Paris. An agreement—the Treaty of Paris—was finally achieved and formally signed in January 1973 by all parties. (South Vietnam remained reluctant, but signed.)

America exits: In April 1975 the North Vietnamese forces raged into the South and annihilated all major defenses. Whatever Americans remained—military and civilian—were safely evacuated from Saigon. The day after that city was taken over by the North, it was renamed Ho Chi Minh City, in tribute to the late leader who thirty years before had officially implored President Harry Truman to allow him to accomplish the same goal of reunifying the country—only peacefully. Ho Chi Minh seemed to know then that reunification was inevitable, regardless of the human sacrifices and time the effort would require. The major difference then was that Minh assured Truman that if Vietnam were allowed to proceed independently, Minh’s regime would hold national elections, which would unify the North and South under one elected government.

One can only wonder whether Minh’s proposal would have occurred had Truman granted him the opportunity. But certainly America would have been spared warfare.

Aftermath: Although fourteen countries participated in the modern Vietnam conflict, it is widely believed that Americans suffered the severest consequences: More than 58,000 Americans died (eight women), or are MIA’s (missing in action); and over 300,000 wounded. This does not include an obscure but significant number of U.S civilians that had served in a humanitarian role—such as nurses—that remain unaccounted for. The actual dollars spent reached well over a hundred fifty billion. And calling the many years of American combat in Vietnam a “War” can only be done so idiomatically, because no U.S. administration that was involved in the decades-long military struggle ever officially declared War on Vietnam. And regardless of the American war process that prevailed for three decades, Vietnam still became unified under one government. In 1976 North and South officially became one, the Socialist Republic of Vietnam.

Indeed, as the USS Constitution sailed away from Danang on May 26, 1845, Lieutenant Dale’s words, “...it seems, I must say, to have shown a sad want of 'sound discretion,' in commencing an affair of this kind, without carrying it through to a successful conclusion,” had evidently lain ignored, except by the country for which they were intended.